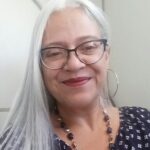 Adjunct Professor in the Department of Education of PUC-Rio since August 2018. Postdoctoral scholar in Education from the Open University of the United Kingdom. DPhil in Music, University of York, England; MEd Open University; MSc PUC-Rio; BA CBM, Rio de Janeiro; BEng UERJ. She has also acted as Adjunct Professor at PPGE/UNESA (the Graduation Program in Education at the Estácio de Sá University) (2011-2018), where she served as Coordinator of the research group on Information and Communication Technologies in Educational Processes. Under her leadership, the group produced five collections of research reports conducted in Brazil, Portugal and in several Anglophone countries in the 2017 bilingual volume Education and Technology: critical approaches. She was a Professor-Researcher in the Open University of the United Kingdom between 1998 and 2012, where she also acted as a Visiting Researcher (2012-2016). She participated in the implementation of the first online course offered by the institution (1998-2001), as well as in the implementation stage (2006-2008) of the OpenLearn project. Her studies maintain a continued interest in the relationship between technology and human beings and her current research addresses themes of Education and Technology from critical-discursive perspectives, focusing on the consequences of the use of metaphors. She coordinates the research group Discourses on Education and Technology, DEdTec.