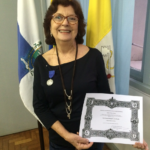 Emeritus Full Professor (2015) at PUC-Rio. She holds a Master’s Degree and a Doctoral Degree in Education from the Pontifical Catholic University of Rio de Janeiro (1992) and a Specialization certificate in Sociology at IUPERJ (Cândido Mendes University). She created the research group SOCED (Research Group in Sociology of Education). For nearly two decades, she developed research in primary schools (1st segment of elementary school) on the conditions of schooling of the working class social strata. At the end of the 1990s, she started investigations on the schooling of elite groups and later turned her interest to the question of how "school success" is produced. For almost a decade she investigated schools that were high ranking in federal assessments (Prova Brasil, ENEM) in the public and private sectors, focusing on the strategies of these institutions for the development of a school culture ("habitus") that enables the good performance of students. She received an Honorable Mention at the XXIII Young Scientists Award (2008) for her performance in the education of researchers and was Educational Personality in 2008 (ABI, ABE, Folha Dirigida), by direct vote of the educational community. The last project of the research group SOCED is in its final stage studying professional education in Early Years and Primary courses.